The Killer Bees return to Night City to find war brewing between the Iron Sights and the Morrison Square Neighborhood Association. This conflict is really a proxy fight between Militech (Iron Sights with edgerunner support) and Arasaka (the Killer Bees and the Morrison Square Neighborhood Association). I want the party to be there when this occurred to allow them a bigger role in this ‘neighborhood’ conflict, since they are indirectly one of the causes of it.

It is in West San Morro that both Militech and Arasaka come out swinging and the Hot War bursts into flames that quickly cover not only America, but most of the world.  How did this all come to be? 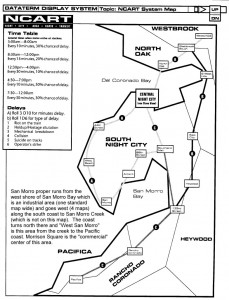 In our timeline, San Morro (see Night City Sourcebook for maps and details), which is located on the southern end of Night City at the mouth of San Morro Bay, has been a major focus of our Meta Campaign. When we started, with the exception of the blocks in the area of the NCART station, which had a small NCPD presence, the area was poor and under the thumb of two organized crime groups. At that time, San Morro turned quickly into a Combat Zone as you got a few blocks from these criminal organizations reach. A business consortium, that wanted to clean up the area and build a luxury hotel and renovate the neighborhood, hired the group. This was in 2019. To make a long story short, they were successful, and afterwards formed a security company called Security Solutions (the S.S.), but earned the nickname “Security Liquidations”. Fortunes were made, the party fixer, Roy (that player is also Bea), got himself elected to the city council (as one of the few elected members, since the top 10 corporations in the city appoint most of that group), and since that time has become the Norcal State senator for Night City. The one of the principle backers of the hotel project turned out to be Roy’s father, which he did not know until well into that campaign. The father is a major Euro power player (fixer), who has now acknowledged him as his son and heir apparent. Col. “Blackjack” Pershing (one of Rose’s player’s other characters) established a small Power Armor Research and Design firm, Lonestar. Security Solutions and Pershing’s company’s growing successes attracted the attentions of both Militech and Arasaka. Militech, however, ended up with the new hotel’s security contract because of Security Solutions’ less than savory reputation.

In the end, corporate treachery and a proxy fight forced the dissolution of Security Solutions with Lazarus getting the Military Division, Militech getting the San Morro office and the main corporate assets, while Arasaka got the Saint Louis office. Militech, by calling the notes formally held by Security Solutions, tried to force Colonel Pershing to sell his company to them for “peanuts”, but Arasaka appeared as a “White Knight” and bought the debts and the company. The terms were generous, and enriched all the PCs concerned.

Militech’s takeover attempt enraged Col. Pershing and he maintains a personal hatred of the arms giant, which is mutual. In fact, the Colonel has done a lot of research for Arasaka, and they are close allies. In our timeline the Colonel is the principle developer of the Arasaka “Blackjack” stealth suit and a major contributor to the “Daioni” PA conversation. His principle business is a world-class mercenary unit now of about regimental strength. While Arasaka has no financial stake in the unit, they are a major supporter, and ‘unofficial’ employer of the unit. Arasaka will hire them when it is politically ‘unwise’ to use their own forces. The unit has served in Africa (our Liberian Campaign), and has recently being doing training in Brazil under the auspices of Amazonian Security. The unit has been secretly and unofficially brought back to the Night City area and matched up with new equipment. Arasaka intends to use them to press its war with Militech on United States soil. By using a unit made up and commanded by former United States military officers, they hope to diffuse any adverse governmental reaction to their planned offensive. If you’re wondering, yes, this deployment will eventually become a major part of our Fourth Corporate War Campaign.

How does all affect the Killer Bees? Well, those who have been following this thread from the beginning know that the Killer Bees worked for CINO (and Arasaka) during the Ocean War. The local Arasaka office has always shown an interest in the group and been very helpful to them, even when they did not employ the team. This has many of the Killer Bees curious, but they don’t understand why. It is possible the reason may come out, but if it doesn’t, it will be handled in the Fourth Corporate War wrap-up. The point is Militech has noticed this too, and assumes an alliance of sorts. Also, Bea and Rose (who are founding members of the Killer Bees) are former members of Colonel Pershing’s unit, whose sympathies are well known by Militech. Rose’s father is a close personal friend of the Colonel, and she is half Japanese.

While Morgan, President of the Morrison Square Neighborhood Association, has tried to keep some semblance of neutrality, Militech’s attempted expansion into the surrounding neighborhoods (his own being one of them) has forced him to seek closer ties with Arasaka. The presence of the Killer Bees in the Morrison Square area, who Militech believes to be much more dangerous than they really are, is viewed as an attempt by Arasaka to have a crack team close to one of their primary ‘cash cows’ in Night City (the aforementined resort). They fear that an attack on the now completed and very successful hotel will come from them. Also, Mr. Green, the Director of Militech security for San Morro (and the hotel there) has a personal grudge against the group for the incidents involving his daughter, Amanda, and his son, Seth, in Episode 10 of this chronicle. The team has no way of knowing it, but the Morrison Square area would not be having such a bad time of it if they didn’t live there. Moving out will not help, as the situation now has a momentum all its own. Anyway, they have no idea about all of this, nor should they.

This is the situation when the group returns to Night City. Cleo gives everyone two weeks off. The new team members remain in Night City to get their quarters in the group’s HQ together. Rose goes up to Seattle to spend time with Archie, her husband, who is on leave from the navy. Bea goes to Seattle also to see her buddies on the USS DeWert. Takashi, who is released from Conover’s custody when the team avoids the corporate “cleaners”, is back in Night City when the group returns. He informs them that Bea was also “detained” and had no part in the betrayal of the team. This makes Cleo, who was beginning to seriously plot the deaths of Bea and her mother for that incident, feel awful about those plans. Since Cleo feels that members of this Team are not good candidates to join her for “other job’ as a jewel thief, she decides to dust off her intelligence on one of the Las Vegas Jewelry stores she had previously cased, and during those two weeks off pulls off her heist.

Takashi learns that an Iron Sights member, who has just arrived from Japan, is looking for him. In that character’s life path Takashi blinded the booster, who wants revenge. No team member really wants to have Takashi around, when this became known. Takashi returns to Japan (and the player is taking a few weeks off from the game because the fall season for his favorite LARP is now running).

Doctor Freeman (with Ken as his bodyguard) hung out in the neighborhood for the first 10 days or so, and then had to go to Sacramento to straighten out some license issues to get his medical practice up and running. The Doctor will be back when the player gets over the flu, and Ken will return when he is settled from his ‘real life’ move to a new house. Jimmy has come back to the Killer Bees (work issues settled) after his recuperation in the hospital from his forklift ‘accident’.

Cleo, now that her heist is complete, is using some of its profits to massively upgrade their building’s defenses at her own expense. When we start next it will be the morning on June 8, 2025.